In 2000, the documentary Paragraph 175 was groundbreaking.

Eighteen years after its release, Paragraph 175 remains the seminal documentary on the persecution of homosexuals during the Nazi Reich

Rob Epstein and Jeffrey Friedman’s multi award-winning documentary Paragraph 175 was considered ground-breaking in 2000. It shed new light and provided viewers with important new information on the persecution of homosexuals during the Nazi regime in Germany.

For me one of the highlights was the poignant and sensitively recorded oral histories that German historian Dr. Klaus Müller had collected from some of the last living survivors  persecuted because of their sexuality. Müller introduced audiences to the life stories and experience of Gad Beck, Karl Gorath, Albrecht Becker, Pierre Seel and Heinz Dormer; men who survived Nazi persecution, endured in silence for decades before coming forth to share their experiences in this moving documentary.

The experiences shared were diverse and deeply personal. These oral histories introduced audiences to a more complete

understanding of the conditions and dangers that homosexuals faced during the time of the Third Reich as well as the Weimar-era culture in Berlin. Albrecht Becker (image left courtesy of Telling Pictures) shows Becker holding a photograph of himself as a young man. His vivid recollections of Berlin, its nightlife and culture provide unique insights into a world destroyed by National Socialism. Convicted of violating Paragraph 175 of the German penal code with a Jewish physician Dr Leopold Obermayer, Beckerwas sentenced to three years in prison. His Jewish partner was sentenced to Dachau and eventually to Mauthausen where he succumbed to torture and the deplorable work and living conditions.

As the tide of the war turned against the Nazi regime, Becker was among the men convicted of Paragraph 175 but  released

to serve in the Wehrmacht on the Eastern (Russian) front. This experience adds another layer of complexity to his personal narrative as someone persecuted for being gay and later released to fight for those who persecuted him. The image on the right hand side, courtesy of Telling Pictures, is circa 1944 and shows Becker in his Wehrmacht uniform. I’ve only scratched the surface of the rich narratives contained in the documentary Paragraph 175. Their experiences remain as relevant today as when they were first released over eighteen years ago. They remind us of the importance of protecting and nurturing human rights and freedoms, and building a civil society where everyone is valued and respected. When I met Klaus Müller several years ago at a gathering of the International Holocaust Remembrance Alliance I was glad to be able to tell him how much his research and work had influenced some of my own work, and how for many audiences this was their first time hearing the personal testimonies of men persecuted for being gay during the Nazi era in Germany. Paragraph 175 has withstood the test of time and remains an essential learning resource for the general public as well as Holocaust educators.

If you have not yet seen Paragraph 175, I encourage you to add it to your list of must-see films. 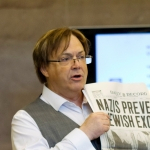